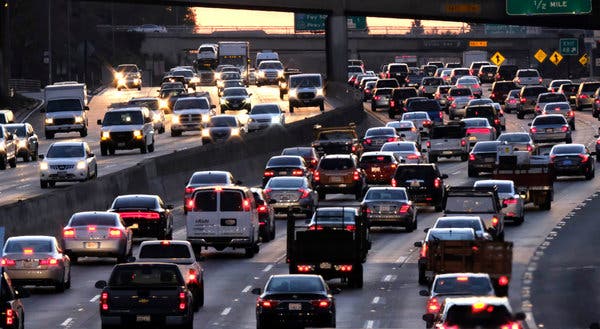 The retired Cardinal Gaudencio Rosales made something of a name for himself in the Philippines in 2015, after he got out of his car in the middle of a rainstorm to direct traffic in the capital city Manila. “We were trapped for over an hour and we were rushing to another engagement. I said to myself we cannot take this anymore.” The then-83-year-old reportedly walked nearly a kilometre through stand-still traffic to find the cause of the jam, and then set about sorting out the mess himself.

In cities across the world, commuters waste hundreds of hours a year sitting in traffic. INRIX, a transport analytics company, uses data on traffic flows to estimate the scale of the problem. Of the cities in its dataset (which doesn’t include many developing countries), Bogota tops the rankings, with its commuters losing on average 272 hours to congestion in 2018, followed by Rome at 254 hours and Dublin at 246.

What price do you pay for traffic?

Without many actually realizing, traffic imposes real financial costs on commuters. Do we simply take this as a given? Is this now considered a “normal” hole-in-your-pocket, and just simply accepted? It sadly appears so. A journey that would usually take 30 minutes in traffic-free conditions is likely to take at least an hour when traffic is bad, in most places.

Putting a number on this cost is difficult, but INRIX uses guidelines from the U.S Department of Transportation to estimate costs for commuters in the U.S., U.K., and Germany.

The reality? As The Economist reports in its article on the hidden cost of congestion, time commuters spend bumper-to-bumper in traffic is time they can’t spend doing anything productive. They are paying for every extra minute of commuting time wasted. Their numbers are probably underestimates. Drivers waste fuel when sitting bumper to bumper and traffic jams make it more costly to move freight around (increasing the prices consumers pay for goods), amongst other factors. The results are incredible.

New York City tops the rankings when it comes to the total cost of congestion: commuters wasted a staggering $9.5 billion in 2018. Boston leads the U.S. on the per-capita costs per driver, with the average Bostonian driver sacrificing $2,291 last year.

In comparison, Germany is doing significantly better. At national level, traffic cost Germany a total of €5.1 billion, or €1,052 per driver. Still significant, but significantly less than New York City. INRIX suggests that there are three main reasons for this: Germany’s consistently high levels of investment in rail and road networks, its provision of pedestrian and cycle infrastructure and its forward-thinking urban planning, exemplified by the car-averse development of cities like Freiburg and Tubingen.

Time spent sitting in traffic jams represents a huge financial drain on cities around the world. Governments, both regional and national, would do well to follow Germany’s lead. But does the modern urbanite driver-commuter nowadays simply accept losing thousands of dollars a year? Is this just an extra, albeit indirect, form of road tax?

Stay tuned for our next post of this 3-part entry which will show destroying traffic jams can not only help to save money, but lives too, as we look into the health issues associated with traffic.

The Economist: The Hidden Cost of Congestion

The Conversation: London congestion charge: what worked, what didn’t, what next

Fast Company: What can we learn from this thriving, car-free German neighborhood? Get rid of parking spaces