This week’s Friday Five highlights some of the most exciting developments in the transportation world. We’re looking at cities, companies, sharing platforms, and more. Enjoy!

Saudi Arabia is heavily investing in advanced technology to bring its public transportation network into the future. It plans to create driverless, automated trains in its metro system that ought to increase safety and efficiency and reduce delays. Buses and trams are scheduled to get this new technology a little further down the line.

It’s no secret that car ownership will soon be a thing of the past. The cost of running a car that is being used for maybe 5 percent of any given day is simply not worth it. Volvo have introduced a third alternative called Care by Volvo, where one monthly subscription gets you access to a car as well as servicing. Could this be the future of car ownership?

Aston Martin has announced the coolest thing you’ll see today. Its Volante Vision Concept is a 3-seat electric hybrid autonomous aircraft. The company believes that air travel will be at the forefront of future urban transportation, and this is their solution. A visually stunning light aircraft that can navigate the narrow spaces of the world’s biggest cities.

Rideshare giant Lyft is committed to a better transportation future, and believes that a key component of that goal is shifting to autonomous cars. Hoping to reduce accidents, traffic, and vehicles on the road, Lyft is establishing a self-driving network to work in conjunction with its dedicated autonomy team to make their vision a reality.

The capital of Vietnam, Hanoi, is a centuries-old city known for its meshing of French and Southeast Asian influences. Its hectic commercial districts and peaceful temples give the city a dual personality of chaos and serenity. Vietnam just may be the motorbike capital of the world, and hopefully soon it will convert to the e-scooter capital.

Read More
Welcome one-an-all to this week’s Friday Five! This week, we get to grips with autonomous and electric vehicles.…
FFriday Five 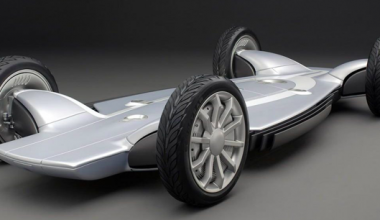