Welcome back to the Friday Five! This week we’re taking a tour of the world’s most interesting new developments in the EV industry. From the mountains of America to the lakes of Switzerland, we’re covering the latest in powertrains, ride sharing, and even e-boats. Dive in!

King of the Hill

If you’re a fan of racing, you’ve probably heard of the annual Pikes Peak International Hill Climb, a grueling 12 mile and 156 turn time trial up one of America’s tallest mountains. This year was a historic one for both the race and EVs, with the Volkswagen I.D. R piloted by Romain Dumas breaking the previous record time by an astonishing 16 seconds. The future of EV racing looks bright.

This week, BMW unveiled its new generation of electric powertrains. This new, prismatic cell powertrain represents the future for BMW, and given how influential the brand is, the entire automotive industry.

Uber has recently unveiled pilot programs to encourage its drivers to use electric vehicles. The ride sharing titan wants to deliver 5 million EV rides over the next year, so they’re giving new resources and monetary incentives to EV Uber drivers in select cities in the US.

If you thought ride sharing and electric mobility were cool, wait til you see this. French startup Seabubble is putting electric hydrofoil water taxis on the waterways of Europe. Rivers and lakes could serve as a great solution to urban congestion, and with sustainable power, these floating e-boats could be commonplace a few years down the line.

The capital city of Nepal, Kathmandu, is a melting pot of sights, smells, and tastes. Its ancient culture and rich history has evolved into a bustling destination at the foot of the Himalayas. Some might even say its web of winding alleys are best seen by scooter!

Read More
It’s time for the second edition of Friday Five! How do electric cars actually work? What can we…
FFriday Five

Read More
Week 23 Friday Five! In this edition, we take both the local and global scale EV projects and…
FFriday Five 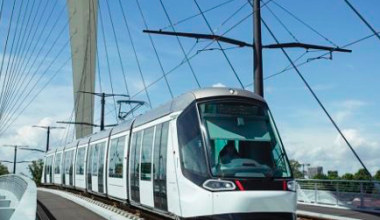 Read More
Friday Five is back! In this week’s rundown, we break down EV news into short digestible news summaries.…